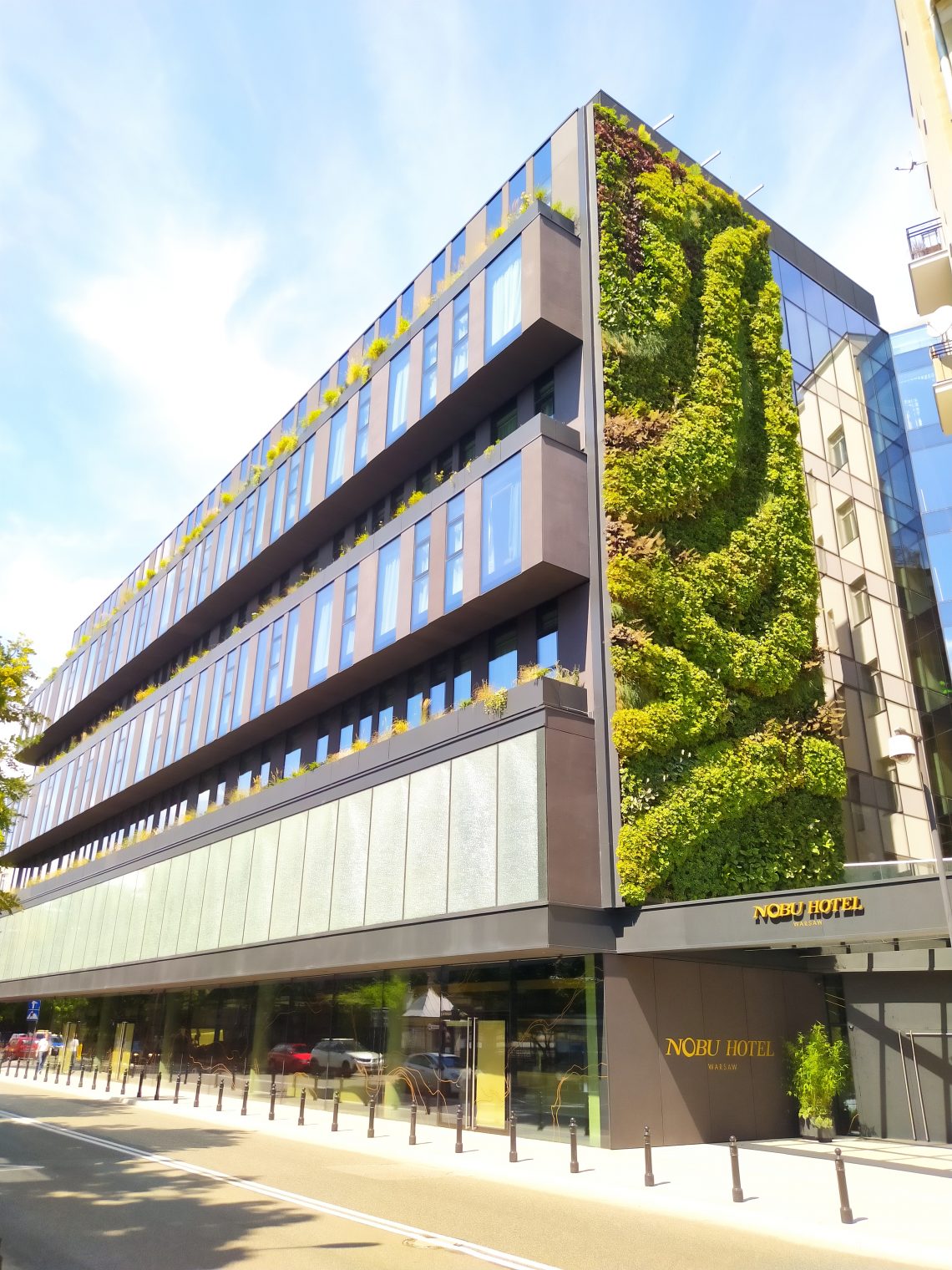 Let’s take a look inside a hotel, where You wear a kimono after bath and can eat probably the best sushi in Poland. Nobu Hotel Warsaw, new member of well known family of luxorius hotels and restaurants, was opened on 3rd of August 2020. With 98 rooms and 19 apartaments is unique in entire Nobu chain. Why? Most probably it’s because of fortunate coincidance.

Story of all Nobu hotels started when renowned Japanese cook, Nobuyuki Matsuhisa, was approached by fan of his cuisine, actor Robert de Niro. After some hesitation, Japanese master of fusion menu started to cooperate with Hollywood star, and the couple (with some other investors), managed to develop “Nobu” first into a global brand of luxorious restaurants, followed by 11 hotels in 5 countries.

Each Nobu hotel follows similar design pattern, with modern rooms inspired by traditional, Japanese interior, and shapes of it’s buildings blended into surrounding architecture. But Nobu Hotel Warsaw is a littlebit different, as part of it is made in distinctive, art-deco style. This particular feature has it’s roots in the beginings of the hotel, when one of Nobu chain owners was spending time in Warsaw, looking for ideas for a new hotel.

He stayed in Rialto, 5* butique hotel , located in XIXth century tenement, furnished with tailor-made, art-deco, hand-made interior. He was so impressed, that when a decision was made to build Warsaw Nobu on adjacent parcel, he insisted that old Rialto should be preserved in it’s original shape, as an integral part part of brand new hotel. That’s Warsaw Nobu could be called the oldest and the newest hotel in Nobu chain in the same time.

“Old” wing of Nobu Hotel Warsaw was refurbished, but most of unique equipment is preserved. You can find here art-deco lamps, a bathroom that looks like in a classy London apartament and unique view on Warsaw skyscape behind the window. On the bottom flor – another very Warsaw-like feature: classy cafeteria, opened to general public during daytime. This is reference to local tradition from interwar period, when citizens were visiting hotels to have a coffe and cake. In new Nobu caffeteria, except coffe and icecream, one will taste…. Japanese sweets.

Let’s head to new wing of the hotel. What strikes from the begining it’s simplicity. No golden handles, no marbles, no crystal lamps, just smart, natural elegance. Which doesn’t mean boredom at all! For example: windows. They look shattered, which gives guests interesting impression and also privacy: while they can easily observe hotel exterior, they are merely visible from outside. In the same time such feature provides a lot of light. On the walls there are paintings of Anna Bimer, they bring a lot of contrasting colours to the interior, which is made from oak wood and concrete.

Hotel is well prepared to host different types of guests, from individual travellers to business groups. For the latter there is of course a spacious conference room, that can be easily divided into smaller parts. The place is full of natural light, thanks to huge “shattered” windows.

Time for the rooms. First impression: they are spacious, but… not very big. The design is smart and some tricks were used to visually enlarge rooms. My favourite one is a mirror above coffe table, which makes You feel like sitting in extremely high room. There are also some references to Japanese origins of Nobu brand: unusually low bed, joga mat in a wardrobe, Denon gramophone next to bed (one can play Nobu-inspired vinyl) and kimonos instead of dressing-gowns. Yes, you are wearing kimono and Japanese flip flops after shower here. Have I mentioned shower? Ah, yes, here goes the European standard: no bathtubes in standard rooms, devices loved so much by Japanese guests…. Which means that the brand aims mostly for Western and clients I think. Rooms are air conditioned and windows unfortunatel cannot be opened, but a/c is silent and flow of fresh air is like natural – that was my impression.

For ones who needs more space and a bathtube, I recommend renting an apartament. During the tour inside hotel I visited the biggest, “presidential” one, number 601. Same style of design, but huge space… and tailor-made, wooden bathtube, that arrived here straight from Japan:

Although all rooms in “new” wing lack balconies, there is a common terrace on the border of old and new part of hotel. It is located in place of a former “well” yard of a tenement, typical for Warsaw architecture of XIXth and early XXth century. Here one can easily see how new and old blended in unique, Nobu Hotel Warsaw:

And now it’s time for the most delicious part: Nobu restaurant. If You want to book a table – hurry up, cause even before the restaurant was opened, all tables were booked two months in advance. In the menu: best Nobu specialities, like signature black cod miso (fished only in one particular place in Japan) and world famous wagyu beef. 10% of dishes are inspired by Polish cuisine, one of such meals are Japanese-styled “gołąbki” (“doves” or cabbage rolls). No poisonous fugu fish or tricky mochi rice cakes in the menu, so a dinner here won’t end in a tragedy. Restaurant can host 150 guests and has a drink bar, only place in Poland where one can try Hoku Setsu sake (served outside of Japan only in Nobu restaurants).

My impression from the vist in Nobu were more than positive, I’m very impressed with the design: i love the simplicity and natural softness of predominant oak. Some 5* hotels are overwhelming guests with luxury, thanks almighty the Nobu is not. It is luxorious in discret way. I would like to thank Oksana, salses manager of Nobu Warsaw for being my guide in the hotel. I wish the hotel all the best and a lot of luck – times for hotels are tough, even for such special ones.

If You are staying in Nobu Hotel Warsaw, I recommend also to take a walk around the hotel and explore the distirct. You can enjoy small bistro restaurants and, as this part of midtown somehow survived II World War, also see how Warsaw looked in 1920 and 1930s. There are some historical places worth seeing:

Just opposite of hotel, on the other side of Koszykowa str, You will find huge complex of Warsaw Technical University, from early XXth century, where for example Polish aviation industry was born in the interwar period (first photo). And if You follow Noakowskiego street, You will reach Tech. University main hall, one of the most photogenic spots in Warsaw (often posted on Instagram). Most of the building of Tech. University (including impressive interior of the main hall) are opened to public during week. On adjacent Emilli Plater street (in front of “old” wing of Nobu) You can find war wounds – wall covered in bullet holes, dating back to 1944 Warsaw uprising (second photo). I also recommend to explore yards of nearby tenements, where You can find historical statues of st. Mary – characteristic in Warsaw landscape.

If You would like to explore this part of Warsaw with private, English-speaking city guide, we recommend our city guide services: please contact us directly via this link.

Thanks for reading! SPARK

This website uses cookies to improve your experience while you navigate through the website. Out of these cookies, the cookies that are categorized as necessary are stored on your browser as they are essential for the working of basic functionalities of the website. We also use third-party cookies that help us analyze and understand how you use this website. These cookies will be stored in your browser only with your consent. You also have the option to opt-out of these cookies. But opting out of some of these cookies may have an effect on your browsing experience.
Necessary Always Enabled
Necessary cookies are absolutely essential for the website to function properly. This category only includes cookies that ensures basic functionalities and security features of the website. These cookies do not store any personal information.
Non-necessary
Any cookies that may not be particularly necessary for the website to function and is used specifically to collect user personal data via analytics, ads, other embedded contents are termed as non-necessary cookies. It is mandatory to procure user consent prior to running these cookies on your website.
SAVE & ACCEPT